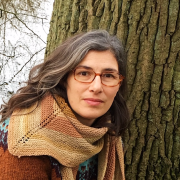 On a dreich day in January. I don’t like January. I always have a hard time finding back into real life after all the merryness and togetherness of Christmas and new year’s eve. Plus there’s still not much light here at this time of the year and with all the Christmas sparkle down I find myself yearning for warmth and light. Or snow, that would also be nice.

Today was no exception. Depression was creeping in and showing its ugly face. I decided to overthrow my schedule and make room for a bit of time at my sitspot.

But today I couldn’t really open up to nature. I heard chickadees everywhere but they didn’t cheer me up.  I spotted a mandarin duck in the river but it flew away with the other ducks when I came closer. Everything looked worn, trodden down and pale. Only when I eventually admitted my own feelings things began to shift inside me. I had been scared by my planning session yesterday. By the changes that lie ahead. I had began to question myself, to tell myself that I was being naive and clueless. When I realized this the cloud slowly lifted. I began to breathe again fully. Finally I could enjoy the song of the chickadees and the coming and goings of the sparrows.

On the way home I had a second look at this tree that I have passed so many times. I discovered that it was quite easy to climb.  I remembered @waldlaeuferbande’s podcast wild+frei and just did it. It felt so good and rather empowering.

So, if you feel blue yourself be nice to yourself. Don’t beat yourself up. I’ll try to do the same today.

And if there’s a nice tree nearby, go climb it!

(And go listen to @waldlaeuferbande’s podcast. There’s an episode about the five dangerous things your kid should do and I can’t recommend enough – works also for adults.)